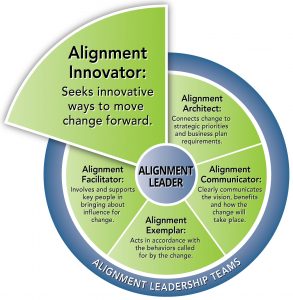 A successfully aligned organization makes hard choices, gets the right people involved, has a strong alignment leader, and absorbs complexities.

Aligning Resources for Things that Matter in Organization Design

It can be difficult to distinguish your organization from your competitors and reduce imitations. Differentiators give you an edge.

Our philosophy is that aligned organizations can better optimize their resources to create both greater efficiencies as well as desired growth.

To make fundamental changes in how business is conducted in order to help cope with a new, more challenging market environment is the basic goal in almost every case.

Why You Need to Challenge the Status Quo

Every brave leader with the guts to take bold risks and challenge the status quo can make a real difference. Don't be afraid to try all sorts of new things and think outside the box.

Examples of Leaders Who Demonstrate the Alignment Innovator Competency

“Where there is a new invention, change, product, etc. Jeff Bezos will be the first to tell you about it.” Jeff never enjoyed participating in or leading discussions and meetings that strictly used PowerPoint, so he changed these discussions and meetings. Instead of scheduling a meeting day and just having people show up, Jeff decided to send out a 6-page document to each attendee explaining which topics will be discussed during the meeting. Jeff uses the spoken word to communicate and lead his meetings. At his meetings, thoughts surrounding the 6-page document are discussed and plans are drawn and implemented making meeting times very efficient and productive. Jeff Wilke, who runs Amazon’s consumer business said, “I would say his (Bezos’) style has gone from being more prescriptive to teaching and refining.” Bezos is hyper-intelligent, ultra-driven, and obsessed with detail. He wants to “make the world a better place,” and will ensure his staff knows what is expected of them to make his vision come to pass.

Self-made American business woman and a pioneer in her field

“Raised as an uneducated farm laborer and laundress, Walker transformed herself into one of the twentieth century’s most successful, self-made women entrepreneurs.” During the 1890s, Walker began to suffer from a scalp disease causing her to lose most of her hair. With her brothers being barbers she consulted with them and experimented with many homemade remedies and store-bought products to find a solution to her hair loss condition. After 10+ years she founded her own business and began selling Madam Walker’s Wonderful Hair Grower, a scalp conditioning and healing formula. Walker traveled for a year and a half promoting and selling her products door-to-door. She demonstrated her scalp treatments in churches and lodges. In 1908 she opened Lelia College to train Walker “hair culturists.” By early 1910, she settled in Indianapolis, then the nation’s largest internal manufacturing center, where she built a factory containing a hair and manicure salon and another training school. She expanded her business to Central America and the Caribbean. By the time she died, she helped create the role of the 20th Century, self-made American businesswoman, establishing herself as a pioneer of the modern black hair-care and cosmetics industry.

COO of a national non-profit organization

As COO of a non-profit organization, this leader recognized the power she had in making decisions and channeled her ability into becoming a team-builder. She is known for being very outspoken and opinionated, but she leveraged her team and solved problems with the help of other people. As with most non-profit organizations, funding has always been a center focus. Whenever the organization needed to figure out where they were going to get more funding, or what their strategy was going to be, this particular COO was usually one of the first to suggest developing a team, and involving specific stakeholders who held power and perspective that would be informative to the organization. With this innate ability, this innovator has been able to progress in her career; but, what has set her apart from most COO’s is the fact that she not only thinks about how to solve the problem, but also who should be involved to help create and formulate answers. Over the years, one of the challenges she helped her organization solve was how the organization would shore-up funding so they weren’t completely dependent on particular sources. This effort truly exemplifies her tenacity to solve organizational problems with the help of others.