An Alignment Communicator practices honest, open, and immediate communication, clearly describing the vision, benefits, and how the change will take place 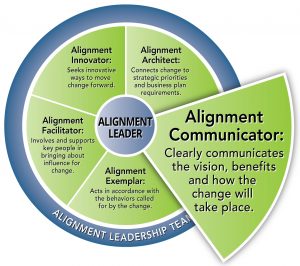 Unless it’s your birthday, secrets have a tendency to erode trust. It can be difficult to determine what information should be shared, how, and whether communication efforts have been effective.

Organization design discussions need to be centered on customers and the marketplace. By structuring the conversations with tools and frameworks that encourage objectivity and a marketplace focus, we create a less political, less emotional atmosphere.

10 Benefits of an Aligned Organization

By definition, an aligned organization is one that optimally syncs the work, structure, metrics, people, rewards, culture, and leadership to strategy. So, what are the practical benefits of achieving organization alignment?

5 Ways to Manage the Disruption of Change

Even when the change is ultimately for the better, it’s still disruptive and uncomfortable at first. Good, clear communication is critical throughout the change process.

Examples of Leaders Who Demonstrate the Alignment Communicator Competency

As Vice President of International Development, this leader is highly involved in figuring out how to grow the organization globally. To reach this vision, he has designed inclusive processes. He has an innate ability to go and communicate with anyone and everyone that will be effective and helpful in achieving the ultimate goal. At times, his communication style felt disruptive. As discussions were taking place, he was off trying to facilitate something with people. After aligning times and places with key people, he would say “we have lunch with ____ mid-session to bring them up to speed with what we are doing. Oh, and you have a meeting with the CEO tomorrow at…” He had an understanding and willingness to recognize who had power and influence. He would connect with these people and channel their power and influence in an accommodating way which diminished any possibility of their influence getting in the way of the process.

CEO of a large Public Utility

This leader is a natural communicator, but in the CEO position his opportunity to communicate was different than others. His communication style was a lot less about the one-on-one personal interactions, he was about being the voice of change. He would resolutely explain change in the manner of, “this is why we are doing it” or “these are the specific priorities” or “this is what we are going to do.” He never delegated the work – he believed change to be real work… his work. He took on the change responsibility. Every moment he spoke, whether they were the front line unionized team members or leaders within the organization, his message remained the same: “Have pride and wear the colors!” What he meant by this message is that every person represents the organization. He wanted them to always present themselves as representatives of an organization that was safe and delivered reliable information. He wanted to build the community. Non-unionized members would completely understand that wherever this Public Utility was, they would fulfill their goals and aspirations and would seek and ask for the desired tools to be effective. His leaders understood their responsibility was not just running a business; he clearly explained his desire to make the business last and was determined to put people in the right position to grow and progress. His message was the same, yet tailored to connect with each group of individuals on an intellectual and emotional level.