An Alignment Architect connects change to strategic priorities and business plan requirements, while making the change effort relevant in every day work 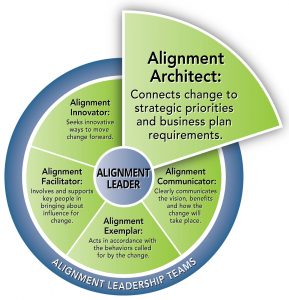 Three Signs That You Need a New Organization Design

In today’s highly competitive global market, companies rise and fall faster than ever before. There are many signals that it may be time to consider implementing a change to your organization design...

Business Coaching – All Talk and No Action?

Coaching focuses on guiding an individual to identify their vision, urging them to achieve excellence, and most of all, empowering them to get where they need to get to. Achieving their goals and reaching their potential.

Measuring change transformation success is not a simple thing – it is a challenging, multi-faceted process. It demands exploring each of the four variables outlined here to ensure that what has been...

Examples of Leaders Who Demonstrate the Alignment Architect Competency

Father of the Toyota Production System

At the time, Toyota in China wanted to catch up with America’s production capabilities. Taiichi Ohno decided there was no reason other than inefficiency and wastefulness keeping China behind, so he set out to eliminate inefficiency and waste in the part of the production process that he was responsible for. Ohno traveled to America to find a solution. This solution later became known as the Toyota Production System (TPS) that he and others later developed between the mid-1940s and the mid-1970s. Because the TPS drastically changed the original manufacturing process, Ohno met continual resistance making the transition rough. Through Ohno’s perseverance and persistence, TPS was adopted and successful. In previous assembly-lines systems, products were “pushed” by production rate higher up the line. With TPS, each production process set out its products for the next process to choose from (just like supermarkets). Thus, production is “pulled” by the demand down the line rather than being “pushed,” causing workers to make the part(s) necessary in the exact moment.

Political leader and Father of the U.S. Constitution

Although regarded as a small, quiet, intellectual individual, James Madison used the depth and breadth of his knowledge to create a new type of government. Madison campaigned for a strong central government and expressed his ideas about forming a three-part federal government – executives, legislative, and judicial branches. Along with this new structure, he thought a system of checks and balances should be incorporated to prevent the abuse of power by any one group. He wrote most of the federalist papers, and most of the US Constitution. He was also an instrumental force behind the Bill of Rights. His suggestions for the Bill of Rights were to ensure Americans (1) had freedom of speech, (2) were protected against “unreasonable search and seizures,” and (3) received “a speedy and public trial” if faced with charges. There were other recommendations, but his ideas and thoughts shaped the United States, and established the rights that Americans still enjoy today.