One of our clients recently told his team that, while the group had historically been extremely collaborative, it was not truly a high-performing, effective team. This company had just completed a significant organizational redesign project. During that process, the executive shared that the CEO wanted the senior executive team to do more than collaborate. The team tackled tough issues, and the CEO worked hard to make sure everyone’s voice was heard during the discussions. As final decisions were made, the CEO expected the team to come together around those choices.

This executive concluded by telling his team he wanted them to take the same approach: progress from collaboration to teamwork. He basically said, “We can’t just get in a room and be polite to one another. We have to get to a place where our thinking and our mindsets are aligned — even if we’re not all one hundred percent on the same page.” This example illustrates how building effective teams adds another dimension to the organizational benefits of alignment leadership. Executives who become Alignment Leaders® can work to build stronger teams at the same time they devise and implement organizational changes.

Here are some specific considerations for applying alignment leadership to team building.

Recognize that we get results through people

The typical executive grows in their career because they are task-driven people who get things done. Everyone needs to accomplish tasks. But we all know leaders who push through the task regardless of the consequences to others. This can leave casualties — people who are steamrolled or left behind — when an executive is too focused on completing the task at hand.

On the other hand, we notice and admire leaders who work with their people, inspire them, and take them along for the journey. They know how to get results. Yet they do it in such a way that the outcome becomes a team set of results.

An effective Alignment Leader enables the organization to achieve great results by setting up the right structures, processes, and so forth. They also recognize their people represent a dynamic component that they cannot control and manipulate as they might do with other inanimate forces in their business.

People have the right to think and act for themselves

Employees have the right to choose whether to be on board with the direction you are moving. That can be disappointing when their choices do not align with our intentions. But it is also satisfying when they come to decisions of their own volition and make events happen in a positive way.

For example, an executive might introduce a new organizational structure. Some may complain about the details, but at the end of the day, the leader can work around those objections. However, he or she cannot go to a person and tell them what to think. They might offer the complainer a bonus if they agree to the change. The person might go along to get the incentive. Still, they disagree and the team is not unified.

The executive mentioned previously told his staff he wanted to ensure the members would progress beyond simple collaboration towards becoming a truly effective team. He did not tell them, “You’re going to operate like a high-functioning team or I’ll be angry with you.” His message was, “I want us to raise our vision to expect more of ourselves than just going through the motions of being polite to one another. I want us to behave and act in ways so we will perform quite differently.” His efforts were aimed at honoring everyone’s right to think for themselves, with the hope they would be willing to do whatever was required to achieve the desired results.

It is easy to praise the work of high achievers who go above and beyond expectations to achieve success. But even if some people’s efforts fall somewhat short of what we hoped for or expected, they still came to work; they still put in the time; they still contributed. Their efforts may not earn them a promotion or bonus, but they should still be appreciated for what they did to contribute.

As the large organizational change mentioned above came to an end, the CEO was complimentary and appreciative of nearly everyone on his team for their contributions. But it had not always been smooth sailing. There were some people who were disagreeable and pushed back. But once the team got to a place where they were finding the answers, the CEO did not hold a grudge against those people. He simply appreciated the fact that they went through the journey and came out on the other side. He recognized that he needs their engagement not just for this problem, but with other issues ahead over the long term.

What is particularly telling in this example is that — even among those who resisted the redesign – they now talk about those changes in a positive way. They also tell their teams how much they appreciate going through this process.

Case in point: the executive described above was not very vocal during the large group settings (although he did participate in smaller subgroups). Yet thanks to the CEO’s alignment leadership, this executive felt like he was a part of the process and the solution. Now he is passing those expectations and positive attitudes down to his team members who will work on the next phase of the transformation. 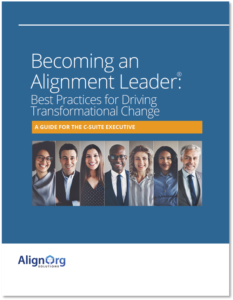