“Collaboration” has become a fashionable buzz word for organizations of all types. However, as we observe leadership teams and their organizations, we sometimes find their self-described collaborative cultures are actually based on consensus rather than collaboration.

“Nothing is what happens when everyone has to agree.” – Seth Godin

We previously worked with two multi-billion-dollar organizations in the process of merging. Whenever we had meetings or formed transition teams, Company A would bring 5-7 people for every one person representing Company B. Initially, Company A attributed increased participation to having a more collaborative culture. However, it soon became evident this was not the case. In Company A, decision rights were unclear. Everyone felt they were the decision-makers on every issue, so every person affected was invited to each session. A tremendous amount of efficiency was lost by involving large numbers of individuals. Meanwhile, people working in the lower levels at Company A were highly frustrated because decisions were not being made. After a challenging first year, executive management changes at a newly merged organization brought more thoughtful leadership choices and more efficiency soon followed.

Collaboration – not consensus – enables high-performing teams to deliver top results. The distinction between the terms “collaboration culture” and “consensus culture” reflects the differences between the related skill sets of problem solving and decision making. Collaboration refers to the process for proposing options and developing solutions, while consensus addresses how to make the necessary decisions. Collaboration enables your organization to fully involve the people whose knowledge and insights you want to leverage. The group shares ideas and builds upon each other’s suggestions. They then draft recommendations to a leader with the authority and accountability to make the final decision. On the other hand, consensus culture prioritizes reaching a unanimous agreement over working together to find the best answers.

Getting everyone to agree on a decision would be an ideal outcome. However, reaching that consensus is often a challenge. Working within a consensus culture causes frustration through the organization because the process is slow. Leaders say they want to make a decision, but many are unable or unwilling to exert their authority to make choices that may prove unpopular. Often decisions are not made at all, as organizations unable to find a mutually acceptable solution will park the decision.

There are several observable characteristics that distinguish a culture of consensus.

There are times when organizations will want to reach consensus on major decisions, such as situations where actions are not easily reversible. Examples include an executive-level decision that will affect operations for multiple years, or one with a high cost for backing away from the choice. Still, consensus should take a back seat to the more productive approach of collaborating to achieve maximum results. The pandemic has reinforced that the need for agility is paramount to survival and growth.

How can leaders dial down a culture of consensus? As we note in our book Mastering the Cube, culture is basically a collection of organizational choices. Revisiting the choices that created a culture that prioritizes consensus over collaboration points the way to transforming a challenging culture into a more effective environment.

Here are some techniques that organizations can deploy to move beyond a consensus culture.

It takes time and focus, but a consensus culture can change. We recently began working with an organization that has a solid multi-year strategy. However, they have struggled to choose strategic priorities for the upcoming year. Their list of priorities was long and we all know that whenever everything is priority, nothing is a priority.  As facilitators, our role was to break through the need for consensus.  We set guardrails which will allow decisions to be made by the right roles in the organization and alleviate some of the need for consensus.  Also, we are now seeing leaders modeling the behavior of asking the tough questions, making trade-offs, and challenging employees, setting the stage to build a high-performing team.

This step-by-step guide will help you improve your decision-making processes so you have clear perspective on the choices & opportunities in front of you. 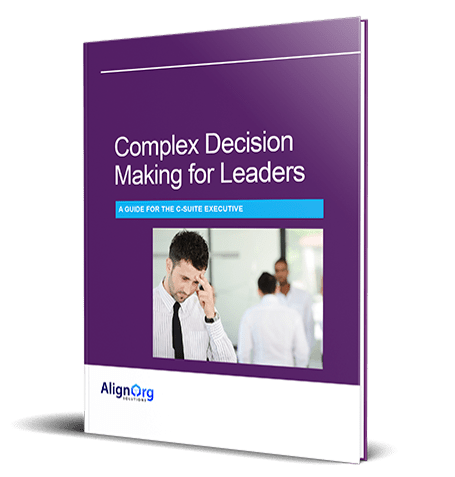 We've also sent the guide to your email. If you do not see it, please check your spam folder.  Thank you!